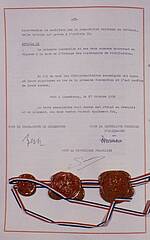 We are a public intergovernmental institution based in Trier.

The legal basis for our work is the Convention on the Canalisation of the Moselle (Moselle Convention) that was signed by the Federal Republic of Germany, the French Republic and the Grand Duchy of Luxembourg in 1956.

The inaugural meeting of the Moselle Commission took place on 21 December 1962, one and a half years before the large-vessel waterway was completed.

The Commission’s general remit is to promote the interests of shipping on the Moselle and to ensure that shipping continues to operate as profitably as possible.

The Ordinary Meeting of the Moselle Commission is convened twice a year.

Each of the three member states despatches two permanent delegates and up to two deputy delegates to attend these plenary sessions.

The President of the Commission is elected from among the Commission’s ranks by a majority of the votes cast.
Each of the three states holds the chair in succession and in alphabetical order.

The Moselle Commission’s decisions are normally prepared by its special committees and are taken unanimously.

The votes cast by the delegates count as if they had been cast by the respective governments, on whom they are binding. The joint rules established by the Commission must therefore be enacted and made public in accordance with relevant national legislation.

Each of the three contractual parties bears a third of the costs for the Moselle Commission’s budget.

The permanent Administrative Office is the Moselle Commission’s point of coordination.

EU consultation on the market access in inland waterway transport

The European Commission is currently assessing several pieces of legislation on the access and functioning of the inland waterways transport market to determine whether the legi [...more]

Film about the Moselle now available in English

In 2019, the Luxembourg Ministry of Mobility and Public Works published a film (in German) which presents the inland waterway Moselle and its infrastructure in the jointly m [...more]
27.06.2017

The Central Commission for the Navigation of the Rhine (CCNR) has published a practical guide on stability during container transport. You will find more information[...more]
Read more news in our news archive